A versatile musician, he loves dealing with different musical genres and languages, including Jazz, World Music, improvisation and composition. Graduated from the Conservatory of Cuneo under the guidance of Paola Mosca, he studied with Dario Destefano, Boris Baraz and Francesco Dillon (Quartetto Prometeo). He has participated in Master Classes held by Enrico Bronzi, David Cohen, Alain Meunier and Michael Sanderling. As a member of the Italian Youth Orchestra he has taken part, in the past, in tours in Italy, Europe and South America, under the direction of Jeffrey Tate, Eliahu Inbal, Roberto Abbado, Claudio Desderi, Gabriele Ferro, Krzysztof Penderecki and Yaniv Dinur. He has also been part of several classical and contemporary music ensembles, performing in theaters in Italy, France, Ireland, the Czech Republic, Israel and Palestine. 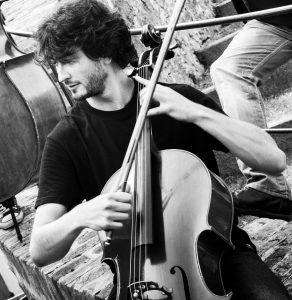