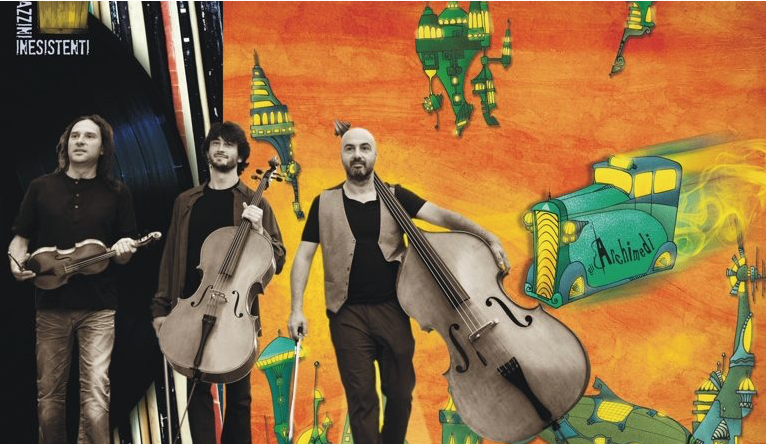 New Model Label
Forvojaĝi – The debut album of the string trio, between world, jazz and classical

Sound experimentation that concentrates classical elements with the derivations of folk and jazz in a music that plays with overlapping creating unusual compositions that take the past, the one already written and reinterpret it in a completely original way through the use of string instruments that mark the succession of songs, moment by moment. The Archimedes play with terms and words even if their songs become real musical suites where the meeting and the fusion of different sounds creates an always constant balance, almost on the invisible edge of a razor that can cut if governed. . Forvojagi incorporates reinterpreted traditional songs, pieces of soul that somehow enter into discussion with our being and leave the concept of easily digestible music for new forms of exemplifications that support a trio of rare intensity. A violin, a cello and a double bass capable of creating bridges between the past and the future thanks to a music that has been reinvented and inherent in the marrow of everything. (Davide Peron, Indiepercui)

A bow touches the strings of a violin, or a cello, or a double bass, and creates a sound. That sound in the air, in a set of notes, is music capable of transmitting emotions, transporting through time. In that case the arch is a door, a bridge, which promises to travel from one historical period to another, from one country to another, from one musical genre to another … all this through a sound: sounds, a melody, a song. So Andrea Bertino on the violin, Luca Panicciari on the cello, Giorgio Boffa on the double bass, travel with their instruments in search of an author, managing to transform pieces that were not written for a string trio and to fit them on as if they were their own. They make us experience the atmosphere of the United States of America in the 1950s where great Jazz was produced and just as great Rock’n’Roll as if, Charlie Parker, Bill Evans or Chuck Berry had written scores directly for them … or they bring us back at the time of the creation of traditional songs from Israel to Ireland. They are not afraid to tackle medieval or classical themes. Even Edith Piaf had never thought of a string trio but they did. We certainly could not miss a passage in the Buenos Aires of the twenties to let us breathe the melancholy and passionate air of Tango. Once the rumor reached the Brazilian intellectuals, they too sprinkled their heads with ashes because their compositions would have been perfect for strings. The only one who has nothing to blame is Django Reinhardt, he has always got along well with his manouche, with the violin. A project made up of arches, for Gli Archimedi, and travels, called “Forvojaĝi”. Fourteen space-time migrations in which we can appreciate Johnny B. Good or Billie’s Bounce, La Vie En Rose or Rondò Alla Turca, Um A Zero or Agala Im Susa and other masterpieces in their genres. All situations completely different from each other but with a single common thread: even if the songs are adapted and arranged, in an exceptional and engaging way for a string trio, they manage to maintain the same spirit and the same atmosphere of the originals, thanks to the ability to transform their instruments from time to time to look like other instruments. They manage to be piano and electric guitar, but also percussion and accordion, clarinet and saxophone. We would like to mention in a special way a song that is particularly close to our heart due to spiritual affinity: Autumn Leaves, in which the trio reaches heights of very high emotions and … in that case the strings are transformed into a rainbow, to lead directly into the arms of the magic. (Magazzini Inesistenti)

The past has never passed and will never pass. The design foundations and firm conviction of Gli Archimedi are based on this assumption, an innovative and atypical string trio that intends to give prestige and to showcase great classics of Jazz, Folk and Classical with unsettling and surprisingly distorted results with a small instrumental revolution: the cello is to the Greek bazouki as the violin is to the banjo or the double bass is to the Irish bodhran. It is only a small part of the tools adopted, just to make you frame how Forvojagi’s ensemble cannot approach any other work and Gli Archimedi grudgingly defend this important prerogative, linked to the freedom to be out of the choir and to break down all sorts of ideological walls, starting with the title expressed in Esperanto, Forvojagi which, translated, aims to incorporate universal understanding and commonality of understanding to “go on a journey” together.
To welcome us at the entrance, there is Aib with a litanic beginning that changes its character in itinere with joyful pro-Balkan intertwining. Following a minimal banjo you take a nice slice of Agala im susa without disdaining the string accompaniment on the finish. The delicate sadness that reigns in Autumn leaves is not an end in itself, but wants to convey the ear into various contemplations that have the potential to change appearance with pleasant surprise. Instead, the lively Road to Columbus catapults us into west-coast contexts while a touch of France arrives with the imaginative swing version of Le vie en rose to great effect and confirms how much the Trio has a polyhedral technique ready for every solution. Italy is not missing either, with the classic Zefiro back by Claudio Monteverdi, bringing back “gentle accents the aer fa grate …” The executive reform implemented by Gli Archimedi also includes embroideries and hems of manouche guitar, Klezmer clarinet, Irish bodhran or South American percussion: that is, a great variety of sounds and suggestions in a first-rate kermesse: from the tango mood of A media Luz to the classic roll’n’roll of Johnny B. Goode or to the final-pleasure-seeker Mozartiano Rondò alla Turca. With evident grace and refined class, the Archimedi have crossed, with unparalleled mastery, a different musical boundary of the present, luring the immortality of the past, but updating the scores with the elegance of their talent.  (Max Casali, L’isolachenoncera)

If the success of the 2 Cellos came with the remakes of Ac / Dc’s Thunderstruck, then also Gli Archimedi can upset Charlie Parker, Edith Piaf, Mozart, Chuck Berry ..
Born in 2015, Gli Archimedi certainly enjoy their imaginative interpretations of famous songs. The basis of the experimentation that pushes them to deal with masterpieces is the undoubted strength of their activity .. structured on a canonical string trio consisting of cello, violin and double bass.
Forvojagi is a record to be exploited, if you are in a recording studio: in fact you can show the talented musician in front of your nose, how to make a song his own, inviting him to understand the essence of a song and where it is to be found. soul of a song that is perhaps an evergreen! If, on the other hand, you are lucky enough to work for a television station, keep Forvojagi always at your disposal, because it will be useful for you to put the right background to a boring documentary on sea lions in heat or to give thrill to a monotonous regularity race on the track. .!
Some moments of this record are really interesting and strangely coincide with the songs furthest from the formation of the three musicians: therefore hearing La vie en rose and Johnny B. Goode evolve a suite of classical (if not chamber) music, is something that draws our distracted attention. On the other hand, the moments in which I take back Mozart or Monteverdi do not cry out to a miracle, so even there is little courage in overturning some moments of ethnic and folk music. The cover is very beautiful and psychedelic, with some Zappian traits: if even some of the 14 songs had been proposed with the madness of Frank Zappa or the aforementioned 2 Cellos, then Forvojagi would have been one of those discs released in 2018 to be voted in the specialized charts . Being inspired by the name of the famous inventor and having crossed it with the instrument they use, must be a further spur for the three musicians in continuing their musical growth …